Education plays a dominant role in Sri Lankan culture and the history of a structured system of education in Sri Lanka dates back to 546 BC. The country has a three thousand yearlong culture of literacy and literature and has a population literacy rate of 95.1%, the highest in South Asia, one of the highest in Asia and a remarkable feet for a developing country.

Almost all the children born in Sri Lanka are entitled to free education while there is a tight competition for entrance to government managed schools and universities.

The admission to government universities are solely based on the results achieved by the students studying under five fields of study including Physical Science, Biology, Commerce, Art and Technology.

In year 2014, nearly 250,000 candidates sat for GCE A/L examination and almost 150,000 of them qualified to enter university. However According to numbers released by University Grants commission (UGC) only 25,000 students received the opportunity to pursue higher education at government sponsored universities. In general only 9% of the Advanced level candidates gain access to government sponsored territory education.

Starting from the year 2001, the Sri Lankan students facing the General Certification of Education (Advanced Level) Examination faced three exam papers in place of four as part of a complete overhaul in school educational syllabus. Prior to the revision of the syllabus the cut off scored for universities were based on the standardised raw arithmetic mean of the total of four subjects faced by the students. However the UGC introduced a new formula, a brain child of Professor Raphael Thatill.

Presented as a fair criterion to calculate the overall rank of students, the calculation takes the scorability of subject into consideration. Thus, the Z-score is calculated by subtracting the raw mark of the subject by the mean mark of the subject, and then dividing the answer by the standard deviation of the marks of the subject. 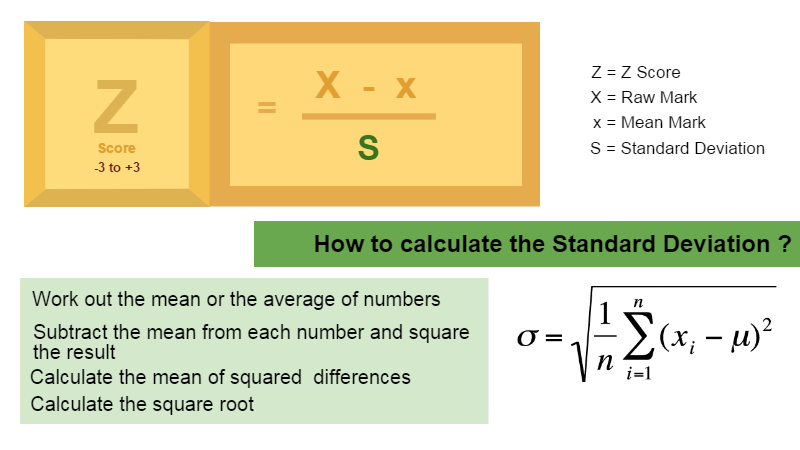 Under the present calculation the bias faced by a student following comparatively tougher and hard to score subjects.

As an example the students following the biology stream from Colombo faces a tight competition to enter the Colombo Medical Faculty requiring to score the highest marks possible. While the subject options available for students include Agriculture, Biology, Chemistry and Physics and a students can choose between comparatively easy Agriculture stream and hard Physics streams. However the result for agriculture could range up to 99 while for physics it can be between 0 – 80 for most of the students, allowing students sitting for agriculture paper have an easy access to the medical faculty.

Designed to assure that a candidate’s chance of being selected to a university does not get hindered by the status of the paper she sits for or by the level of marking her paper goes through the Z-score also combines the general rule of standardisation that was applied to Advanced Level results and university admission since 1971.

In a country with a per capita income of Rs.11, 932 per month, access to free higher education can make or break a child’s future and standardisation of University admission was introduced with a view to even the ground for a student population who were facing the same examination questions but were studying under facility and infrastructure inconsistencies that are heavens apart.

Today, 40% of the university entrance is done on island wide merit quota, 55% on district quota while another 5% has been allocated for students from under privileged districts in the country.

Each year, based on the results of A/L candidates, the University Grants Commission (UGC) produces a list of Z-scores for university admission, which unlike the aggregate of raw marks can be compared across subjects and fields.

This is made possible by bringing the average of each subject to a zero. The standard deviation of each subject ranges between -3 and +3. While the mean and variance of raw marks can differ in raw marks of each subject, the Z-Score are distributed with a mean value of zero and variant value of one, bringing the marks of all subjects to a common ground. Meanwhile district wise standardisation is done in consideration of the education infrastructure facilities and resources available in each district. As per today UGC has identified 13 districts to be in a disadvantaged position including; Nuwara-eliya, Hambantota, Jaffna, Kilinochchi, Mannar, Mullaitivu, Vavuniya, Trincomalee, Ampara, Anuradhapura, Polonnaruwa, Badulla and Monaragala.

Students from these districts with the best Z-score ranking receives a 5% allocation of all island admissions to universities while candidates from other districts receives other merit considerations for national level performance is sports and leadership.