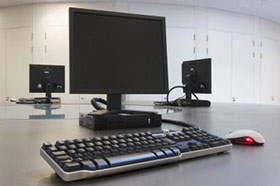 Millions of people all over the world are exposed to the World Wide Web of computers and the information they provide.

Virtually every computer is connected, or has the potential to be connected, to other computers. When connected locally, they provide vital services such as print servers, file servers, CPU servers and when connected externally, offer access to the Internet, world-wide-web and electronic mail.

The use of networking technologies and the long established use of local area networks has made the study of computer networks and the underlying communication technology as important as the more traditional foundations of computer science such as computer architecture, operating systems and programming.

What You will be Studying

Physical properties of copper media, fibre optics, radio communication, and data communication standards. Maximum data rates (theoretical and practical) for different media including some simple analysis of signals. Data encoding of digital signals. The distinction between, and analysis of, physical media and wireless media properties. The difference between narrow band and broad band technologies with particular reference to ISDN and xDSL.

Types of LAN covering standards, topology and performance. Example architectures such as ethernet and fast ethernet, ATM, and WiFi. The operation of LAN switches and the configuration of virtual LANs.

Join for BCS Diploma in IT